Back to: Module: Helping Students Read 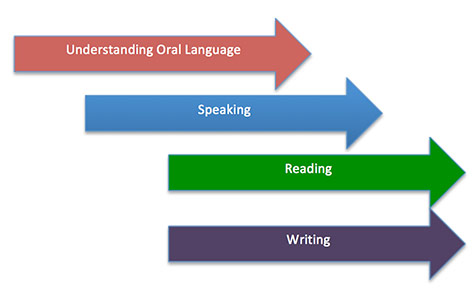 Language use involves a complex set of physical and cognitive processes. No wonder it takes years for children to become adept at using language. Children learn to understand language before they begin to use speech to express ideas. With oral language “receptive language” (i.e., listening and understanding) precedes “expressive language” (i.e., speaking). After all, to communicate meaningfully using oral language requires children to know what they mean by the words and phrases they use. Written language, however, does not follow the same developmental sequence as oral language. With written language, reading does not necessarily precede writing.  The picture to the right illustrates the sequence.

Notice that there’s a large overlap between the development of oral and written language. Even young children, for example, begin to make marks on paper and to distinguish between marks that are pictures and marks that are symbols (e.g., letters and number).

Whether it’s oral or written language, children develop language in a predictable sequence. In part the sequence comes from innate language mechanisms that help children use the structure of the language correctly. In part language development responds to reinforcement. When children talk with their parents or other adults, they get responses that help them refine their language usage by expanding their awareness of what words and phrases mean. Despite similarities in the sequence of language development, its rate differs from child to child.

Remembering that writing was originally built on pictures, it’s important to recognize that drawing is one of the diverse communicative skills that students can use in responding to and expressing ideas. For students with severe language delays or disabilities, including some students with autism, drawing may be an especially important means of expressive language, serving to augment or even substitute for spoken or written language.

Children whose first language is not English also experience challenges when they attempt to learn English as a second language. For some, the first language is well established; for others, language learning is incomplete both in their native language and in English. English language learners (ELLs) also arrive in an English-speaking country at different ages. Younger children tend to learn multiple languages much more quickly than do older ones.

Because conceptual learning depends on competence with language of some type, parents and educators seek help for children whose language development is delayed. The table below lists some language-development challenges and some of the interventions that educators, speech and language pathologists, and assistive technology specialists use to address these challenges.