In the Unit 8 Introductory Challenge, Jessica became overwhelmed when asked to identify whether a shape had a line of symmetry. The trouble wasn’t that the material itself was too difficult; in fact, one of the Grade 4 Common Core Standards is that students should be able to “identify line-symmetric figures and draw lines of symmetry.” The problem was that Jessica needed a step-by-step learning progression to build up to being able to achieve that standard.

Figure 1 shows the learning progression for identifying line-symmetric figures suggested by “Ohio’s Academic Content Standards—Extended, Mathematics.” (You may want to do an Internet search for the document, because it provides learning progressions for each of the Common Core Standards.)

Decide whether a specific line creates line symmetry. The next step after a definition is often a direct concrete example of how to use the definition. Each of the dashed lines shown in Figure 2 is a line of symmetry. Any other line drawn through any of these shapes would not be a line of symmetry. 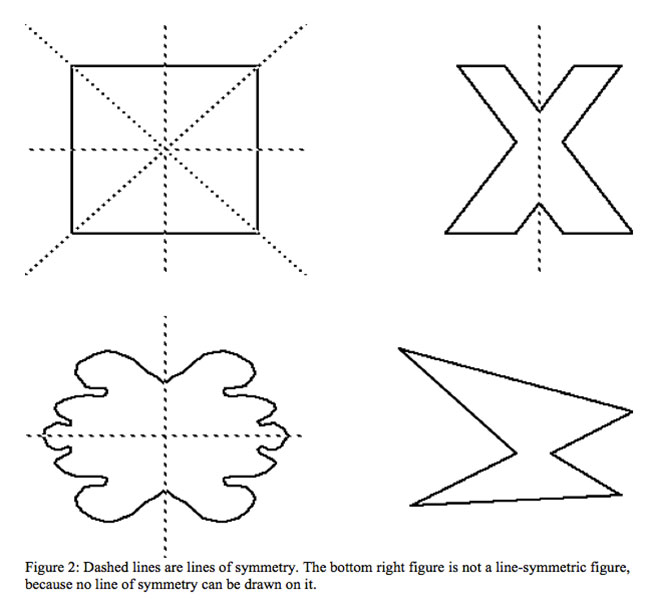 Find a line of symmetry on a shape with line symmetry. Several years ago, a series of books called “Where’s Waldo?” were published. The basic idea behind the books was to find a specific man amidst an entire page of elaborate illustrations. Although it was often time consuming and even frustrating to find Waldo, at least the reader could rely on the fact that Waldo was indeed somewhere on the page. In the same way, it is easier for students to find or identify something when they know that it exists. For this reason, finding a line of symmetry on a line-symmetric figure is placed earlier in the learning progression than identifying whether a shape has line symmetry.