The purpose of this tool for the field is to support educators’ use of a Frayer Model to help students understand important math concepts.

The Frayer Model was created by Dorothy Frayer at the University of Wisconsin. It is useful for helping students understand concepts in any subject. With the Frayer Model, the student or educator writes the name of a new concept in the center oval of a printed template. The student then fills out the other four sections of the template. These sections ask for information about the concept (its definition, facts or properties, examples, and non-examples). A paraprofessional or teacher can review a student’s template and identify any areas of misunderstanding. Often, in math, the most helpful section of the Frayer Model is the non-example section.

An illustration of a completed Frayer-Model template for the concept “rectangle” is shown below in Figure 1. Notice that any shape that meets every part of the definition would be considered a rectangle. However, the facts or properties may be true for other shapes in addition to rectangles. To make the best use of a Frayer Model, try to classify several borderline items. Borderline items might meet the definition but in an unconventional way, such as the square being a type of rectangle. Borderline items might also be ones that meet part, but not all of the definition, such as a parallelogram not being a rectangle. A parallelogram is a polygon and it does have four sides, but it does not have four right angles. 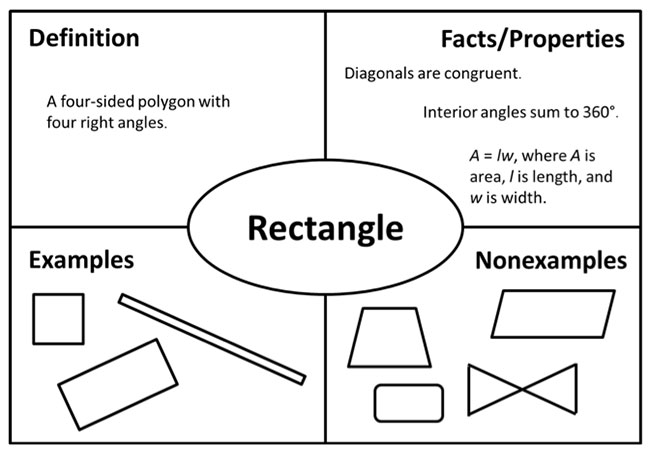